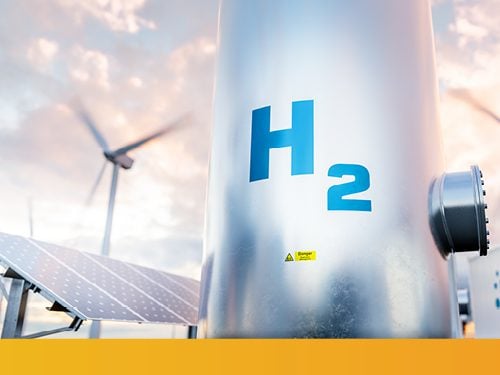 A future in which Green Hydrogen gas is set to replace the carbon-intensive fossil fuels of yesteryear has entered an era of quiet and confident anticipation. As electrolysis technology becomes more commercially viable, the opportunity for the third world to be actively engaged in the energy transition has presented itself at a welcome time.

In an exciting move, Siemens AG has partnered with the Egyptian government to construct the first large-scale green hydrogen project on the continent, ‘a total investment of approximately €120 million over five years in developments leading to a fully integrated offshore wind-to-hydrogen solution' that intends to produce hydrogen for export. The project will utilise Siemens Gamesa's most powerful offshore wind turbine to power an electrolyser array at the base of the turbines.,

Similarly, the South African government and European Union have outlined a joint mission to develop the necessary policy and infrastructure to become competitive global hydrogen producers, with the intention of serving the EU and Japan's stated hydrogen demand from 2030.

The developing world is an especially important conundrum when considering how to reform global energy production to be increasingly environmentally friendly and economically inclusive. The global south remains constricted in their capacity to engage in the ‘energy transition’ due to the vast costs involved in re-appropriating infrastructure for use by renewables – including the transmission of hydrogen gas.

South Africa’s ailing energy sector has necessitated the need for a swift introduction of renewable energy sources as an alternative to the struggling utility Eskom. The state is also acutely aware of the increased withdrawal of funding for new coal and gas projects, powering over 95% of the country’s demand. With favourable environment for solar PV and a 2,800km coastline with great potential for offshore wind, in addition to existing infrastructure fit to repurpose, there is a growing belief that the country could develop a green hydrogen economy rapidly.

Elsewhere, Saudi Arabia is utilising their deep pockets and energy knowledge to develop a $5 billion green hydrogen facility in NEOM – a $50 billion mega-city project meant to represent a modernisation of Saudi society. In eastern Europe, Georgia has outlined plans to retrofit -their extensive hydropower use (75-80% of the country's energy demand) to use the energy and large water supply to produce green hydrogen. The European Bank for Reconstruction and Development (EBRD) has provided at €217 million loan to facilitate the project.

One of the major limitations and concerns of producing green hydrogen, are the large bodies of fresh water required in the process of electrolysis. As fresh water becomes increasingly scarce and droughts more frequent, it cannot be used in such quantities for energy production. These water demands become increasingly capricious in the third-world as a result of droughts, inefficiencies and water pollution. However, the growth of an offshore wind sector could actively work to dampen those concerns with the complimentary construction of desalination plants.

The Council for Scientific and Industrial Research (CSIR) in South Africa is set to release their hydrogen roadmap in which they believe this can be mitigated by the development of desalination plants. While the cost of desalination plants appears prohibitive, the report believes that each plant will cost $0.02 per Kg of hydrogen produced. This figure becomes incredibly attractive when viewed against the $3/kg rate that the Japanese government will pay to import hydrogen from 2030, the major export destination outlined by SA. The EU is offering $2/kg by 2030. At less than 1% of the cost of hydrogen infrastructure, expensive desalination solutions suddenly become useful for ‘green' hydrogen production.

A significant issue raised is how to reduce the dangers of transporting of hydrogen, however the CSRI believes this can be effectively mitigated by storing the gas as an ammonia or methanol mix. Two ports have been earmarked for re-purposing at Saldanha and Koega Bay on the east and west coasts of South Africa, respectively. The Saldanha Bay port appears particularly attractive given its history as a steel manufacturing hub, an industry that declined sharply with China’s dominance in the sector. The opportunity lies in the demand for ‘green’ steel in the EU, steel that has been sustainably produced through the use of smelters powered by green hydrogen.

African regulatory environments remain an inhibitor for growth, however there have been positive actions by the EU to assist in the capacity building and legislative development to make the markets more attractive. Renewable uptake in Africa lacks behind most regions despite the favourable conditions, with about 5% of global generation capacity.

The opportunity to utilise the natural resources to develop the clean energy sector with green hydrogen in mind, has intrigued many new investors hoping to become early market movers. Whether or not the internal capacity and will power exists to facilitate the sector remains to be seen. While the oil dependent nations of West Africa hold onto their resource advantage, the window has been opened to many oil dependent states to take back control of their energy supply and engage in a global energy transition.