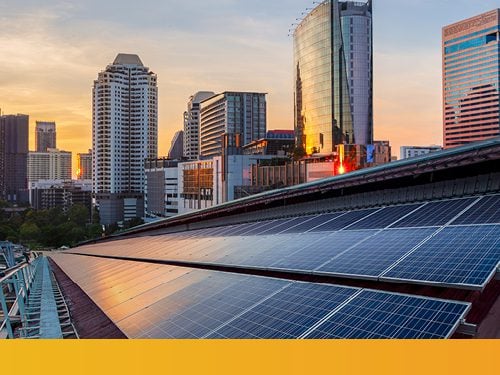 On the 9th of July 2020, the Energy Council launched their inaugural webinar debate series to engage our network how to best utilise the finite capital resources to address the climate crisis.

The infrastructure built to sustain our societies often did not consider the long-term need for energy efficiency, which becomes ever more pertinent as the climate crisis progresses and our carbon footprint becomes more defined. In order to mitigate the damage from carbon intensive industry and infrastructure, it has become necessary to maximise the intersection between affordability and energy efficiency.

The Energy Council invited four established members of the Finance and “Green Energy” community to discuss the preferable route, in regards to the availability of investment into tackling climate change. Moreover, to discuss whether the construction of new clean energy projects or rather investing into ‘greening’ our existing infrastructure to maximise efficiency should be prioritised by society-at-large. Below is a summary of the discussion.

David Linden, our learned moderator and former Director, Energy Transition at Wood Mackenzie, eased us in to what was to become a feisty debate by presenting the figures from our webinar poll, which showed our audience leaning in favour of the motion that ‘greening infrastructure should be prioritised’. The ambition to match the change required is only constrained by the lack of clarity on the execution of clean energy infrastructure.

The highly experienced Maher Chebbo, GM & Senior Executive Digital Officer at GE, set the debate in motion by posing a question that would surface time and again throughout the debate: “What is easier – to buy a new Rolls Royce and get rid of your Fiat 500, or make your Fiat 500 evolve to become a Rolls Royce?”

That challenge was in migration – whereby you have to maintain the current infrastructure but additionally seek to upgrade and adapt to new requirements. Yet when over 90% of current buildings do not meet the standards for energy efficiency, the solution cannot simply be to raze and re-build – as the costs would be excessive.

Maher turns to the post-Covid recovery, emphasising that a coalition of European countries have quoted a cost of €90 billion to the renovation and upgrade of buildings to ensure they meet the standards for net zero carbon by 2050, “the money is very much dedicated to build renovation systems through these investments”.

Providing balance, Maher acknowledges the $1 trillion Green New Deal fund and the $30-35 billion Horizon Europe fund both of which provide capital for both renovation and new construction.

While all good and positive, the constraint remains that these new systems have to integrate with the existing, ageing systems. Maher introduced this point to explain the interaction between the construction of new energy capacity and the legacy systems upon which they are built or must interact, utilising the example of ‘smart meters’ in Europe.

With the advent of digitalisation of energy systems accelerating with such haste, creating sophisticated, energy efficient infrastructure that fits the ageing buildings and meets the targets for efficiency, carbon neutrality and renewable development is possible.

Mr. Chebbo finished his opening argument with a poignant thought,“my last number is 1%. One percent of efficiency in only five sectors; transportation, oil, gas, energy and the rest of the sector saves you €276 billion over 15 years. Just 1%, so let’s think about it.”

Matteo Mazzoni, Head of Market Strategy at SNAM SpA – one of the world’s leading energy infrastructure operators – believes his company are ideally placed as enablers of the energy transition.

Matteo enthuses that any new energy infrastructure requires sectoral integration in order to maximise decarbonisation. Meaning, that despite electricity being one of the most efficient carriers of energy, it will not be sufficient to meet all the world’s energy demands.

As such, Matteo proposes a broader scope of thinking, that we need multiple solutions within an energy matrix that can bridge the transition. Green gasses are one path he suggests to more immediate supply and demand patterns, as they provide a cheaper cost per unit of energy consumed and transported.

Hydrogen has emerged as one of the ideal gasses that can service multiple sectors with industrial demands, where there are few alternatives to fossil fuels. The ‘marvellous’ storage capacity of hydrogen cells has seen them rise as a true alternative to electrical-based cells in vehicles. SNAM is a signatory of the European Hydrogen backbone, a €1.3 Billion continental project aimed at establishing the necessary infrastructure to allow a truly clean, green hydrogen-based market to flourish.

This is the point that Matteo seeks to embed; that to create the environment in which green and clean energies can be adopted, it is incumbent to first secure the foundations by greening the existing infrastructure and developing the alternatives concurrently.

Sybille Grandgeorge, Director – Industry Banker Power & Renewable, Natixis continued the debate ‘for’ greening infrastructure by emphasising the need for a “holistic” view whereby the whole is greater than the sum of its parts. Sybille argued that, Germany’s massive investment commitments in renewables has largely replaced carbon-free nuclear facilities meanwhile coal continues to dominate the country’s electricity supply. If investment had prioritised nuclear projects, it would have been an easier and more effective route to reducing carbon emissions.

High emitting infrastructure like oil & gas, cement, iron & steel, petrochemicals represent 60% of CO2 emissions. As such, it is necessary “to acknowledge that it will take decades for a fossil fuel-based economy to get rid of its addiction to oil & gas. Throughout the transition decades, greening existing infrastructure is crucial to reach CO2 reduction targets. You can do this through energy efficiency, fuel switching and material use reduction.”

Sybille thinks that in order to ‘green’ high emitting infrastructure, the necessary breakthroughs in design and processes to reach commercially viable carbon capture are still lacking. Her belief is that to acquire the requisite investment, there needs to be policy support by way of “higher valuations of CO2 abatements”.

“The cleanest energy is the one you don’t use,” a point Sybille makes to bring awareness to the growing scarcity of resources, and the need to combat such through alternative investment models that promote energy efficiency – the largest contributor to emissions savings. Recycling materials such as; steel, cement, aluminium, copper and plastic, “not only play a major role in the reduction of CO2 emissions, but limit the strain on scarcity of resources.”

With the growth of EVs and renewables, it is estimated 96% of the world’s copper will be used by 2055 – the geopolitical implications of scarcity necessitate the need to increase recycling.

Sybille concludes by stating that, “focussing only on new  clean energy products such as renewable and storage we cannot achieve a true energy transition, only energy addition, we need to invest in greening existing infrastructure with a holistic approach through efficient processes, innovation, and a higher share of recycling materials.”

Julia Padberg, Principal at SET Ventures, took the lead for the “against” team stating how in order to meet the IEA’s carbon saving targets, research institutes agree that an additional €1 trillion in annual investments between now and 2040 is required. With such a tremendous amount of money at stake, this cannot be achieved.

“If we continue to burn capital by upgrading existing polluting infrastructure and making marginal changes. To reach the point of grid parity where the market solves the problem itself, the priority should be to collectively boost renewable energy assets.”

The first point relates to the capacities for Carbon Capture and Storage (CCS) vs new clean energy generation storage. For Julia the answer is simple – “it is better to avoid generating CO2 than to store it” as this leads to a distraction from building renewable energy assets. Cautioning further that many of the risks of CCS have led to a range of environmental consequences.

Secondly, the question of whether hydrogen fuel-cell cars vs EVs are the preferable mode of transport in the future. Julia’s concern is that the extensive lobbying by the Oil & Gas industry has artificially placed a hydrogen economy at the forefront as a hydrogen-fuel economy would be twice the size of gas-fuelled vehicles, and that hydrogen would utilise existing gas infrastructure. Although Julia supports the notion of hydrogen for energy storage, the efficiency of hydrogen-fuelled vehicles is below 30% in comparison to EV’s at 80%.

Finally, Julia pointed toward the Energy System as a whole. The traditional system transporting energy from plant to consumer is costly and outdated. The alternative of a new system, “would de-centralise generation, storage and usage, require multidirectional energy flow that requires new infrastructure, mainly Smart Grid software, to balance these flows”.

Instead, billions of Euros continue to be dedicated to physical grid reinforcements when smart grid monitoring and control system would be at least 10 times cheaper.

Roeland Menger, Portfolio Manager at EDF, took the wheel from Julia and sped towards Maher’s Rolls Royce analogy suggesting that only through dedicated investment in new clean energy projects will the costs decrease and technologies improve. Instead of upgrading the Fiat, Roeland sees a future of more affordable Rolls Royce’s by exhibiting how new investment in clean energy has delivered results in lowering the manufacturing costs of developing wind and solar energy projects since 2010 and therefore prices of clean energy in general.

Roeland cautions from being too focused on the comforts of Europe where existing infrastructure is aplenty, that we forget about the necessity for change in Sub-Saharan Africa and South-East Asia, which do not necessarily have the luxury of legacy infrastructure.

“This means that 1 in 6 people, over 1 billion people in the world, will not have access to modern energy”

To empower these developing nations it is necessary that large energy infrastructure investments focus on reliable and affordable energy. Beyond new clean energy projects, Roeland emphasises the role of grid networks and alternative storage solutions – which simply will not reach these regions without significant cost reductions from the efforts and investments made by the global finance community.

As each of our panellists opening arguments were digested, Maher’s vehicle analogy rolled onward into the rebuttals. Sybille felt the argument continued to ignore the needs to recycle materials as both upgraded and new technologies all require intense resource exploitation.

Roeland felt this was no different to the status quo where entire economies are built on the limited resources of oil, gas and coal. Julia motioned that the analogy was misplaced, if the conversation was still Rolls vs Fiat, and not Tesla vs other EVs.

Shifting the conversation to micro and smart grid uses in Africa, Maher agreed that in rural contexts there was no alternative to the supply of portable renewables and batteries, as constructing high voltage networks was simply unfeasible. Roeland who has experience investing into energy projects Africa, believed that this didn’t acknowledge the high density urban areas, of Lagos or Abidjan for example, which account for the greatest electricity demand.

Our moderator, David Linden took the opportunity to pose a selection of audience questions to the panellists. The first asked how investment in clean energy should be incentivised and how we define whose responsibility it is to provide capital commitments, which rang the bell for Round 3 of Roeland and Maher’s intellectual tussle. Allowing for Sybille to close out the debate providing her perspective on how to lower technological costs and the geopolitical concerns that underlie energy infrastructure investment.